Freiburg, a small city in Germany has become one of the role models for sustainable urban development in affluent regions. Freiburg is located in a prosperous region in Germany (the state of Baden-Wurrtemberg) a nation known for its automobile production and use. Even so, during the last 50 years Freiburg has taken a myriad of urban planning and policy steps resulting in a rather low car ownership and low car dependence.

Last year, I was on a tour in Germany where we also visited Freiburg and its celebrated new sustainable quarter called Vauban. This area was an abandoned French military camp, which was reused and turned into a very low car mixed-use residential quarter. The place was re-built using strong platform of cooperation between residents and the city government incorporating all kinds of sustainable solutions including integrated land-use and transportation planning. Freiburg’s light-rail was extended to the Vauban quarter, while parking was heavily restricted. Besides the overall urban plan, Vauban includes many unique sustainable experiments such as the solar settlement consisting of 59 units which produce more energy then they consume, employing solar panels (surprise!). 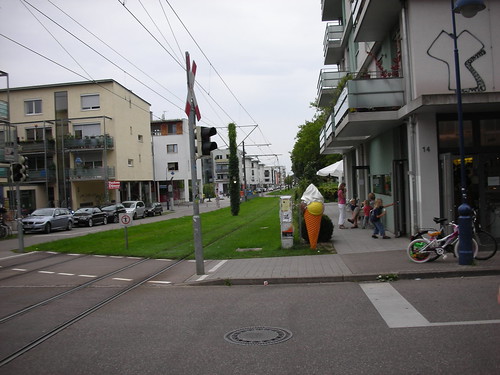 A paper titled “Sustainable Transport in Freiburg: Lessons from Germany’s Environmental Capital” and published at the “International Journal of Sustainable Transportation” sheds light on Freiburg’s path to sustainability, including several anecdotes and recommendations on what can be learned from the Germans’ experience. For example, it describes the way in which Vauban planners managed to avoid the 1:1 mandatory parking minimum ratio for residential developments in Germany:

After long negotiations, Vauban was granted a waiver for minimum parking requirements provided that enough green space was preserved for potential future construction of parking lots. Building permits in Vauban are issued for residential units without parking spots. Residents who decide to own a car can purchase a parking spot in one of the parking garages at the edge of the development for the equivalent of $25,000. Residents who wish to live car-free simply pay a one-time fee of $5,000 to preserve open space at the edge of the development— in lieu of a parking spot.

The authors also describe Freiburg’s streetcar decline and car use rise in the 1950’s and 1960’s which is similar to many other cities in the western world. Besides giving a comprehensive timeline on Freiburg’s sustainable urban planning decisions, the authors point out to an early event, a proposed nuclear plant in the 1970’s that helped form a partnership among many civic groups:

Moreover, during the early 1970s, the planned construction of a nuclear power
plant just 30km from Freiburg’s old town made environmental protection a critical issue (Hopwood 2007). Protests against the state government’s plan to build the nuclear power plant lasted for years and forged an unlikely alliance of leftist students, Catholic and Protestant church leaders, the conservative party, and local farmers. Highly respected civic leaders were at the center of the local opposition to the state government’s plan. Their role in the protests legitimized environmental protection and alternative development ideas for the local population (Chaney 2008;Hopwood 2007).Over the last 40 years Freiburg has developed a strong tradition of cooperation, negotiation, and consensus among city administration, citizen groups, and local businesses (Bratzel 1999). Public discourse, citizen participation, and cooperation paved the way for a gradual change towards sustainability in Freiburg (Bratzel 1999).

In the conclusion of the paper, seven lessons for implementing sustainable transport policies are specified as follows:

You can read the full paper on Freiburg’s sustainable urban development here.

Tel Aviv, the financial center of Israel, is notoriously known for its housing shortage and rapidly rising prices (some of it due to the incompetent Israel planning regime). On more than one occasion it seems as if the regulations have been put in place to insure chronic housing shortage. Building anything next to something else is almost impossible, while creating new cheap apartments in centrally located areas belongs to the realm of science fiction.

Last week gave us just such as an example in a project called the Young Towers (although nobody living today will be young when they are completed). This project consists of two towers of over 40 floors each (video visualization here), under construction right next to the corner of Arlozorov Street and Begin Road (named after the late Israel PM Menachem Begin and not related to any actual beginnings). Although the project is located in the commercial center of the metro area next to the largest train station in Israel and with plenty of public transit access, the authorities made the developer build six underground floors (!) for car parking. Digging that deep the developers had not reached molten lava, but did hit the groundwater sucking money and time out of the project. Even a special Dutch expert brought in to address the issue (and who knows better than the Dutch how to keep the sea dry) could not handle the situation. This is a photo taken from this article (in Hebrew) describing the boondoggle that the project got drowned in:

This shows Israeli planning at its current worst and resembles many situations in places that are not as backward as Tel Aviv. The main priority of planning committees in Israel lies in providing cheap accommodation for cars, while every other objective (housing, schools and so forth) gets pushed back. Israel has planning regulations that dictate the provision of at least one off-street parking spot for each new residential unit, while completely ignoring the size of the new unit and its location. On top of this policy directive, municipalities tend to provide free on-street parking at all times, leading many underground lots to be underused as people keep searching for free spots above ground.

Alan Durning from the Sightline Institute composed an eye-opening post on such mandatory parking lots in Seattle, which he termed “Apartment Blockers” due to the cost and time they add to the construction of new housing units, and the fact that these requirements lead to reductions in the amount of housing units a developer is allowed to build:

City requirements for off-street parking spaces jack up rents. They jack it up a lot at the bottom of the housing ladder. Proportionally speaking, the bigger the quota and the smaller the apartment, the larger the rent hike. For one-bedroom apartments with two parking places, as is required in places including Bothell and Federal Way, Washington, as much as one-third of the rent may actually pay for parking. A flotilla of studies supports that claim, and I’ll summarize them in this article, but first, a case study of residential real estate development may illuminate how critical parking is to the affordability of housing.

While Tel Aviv may be a little bit behind regarding rational urban development it’s surprising that even urban role models such as Portland, Oregon have the same stupid rules. We can take some comfort in the fact that more people are aware that “free” parking is anything but free, and that parking is, in fact, not a public good. Even the city of Mumbai has finally started to charge a fee for on-street parking.

Tel Aviv should learn the obvious lesson from this groundwater case and start focusing its planning priorities on those among us who really need central and affordable housing – humans.