The two largest municipal authorities in Israel, Tel Aviv and Jerusalem, decided to help their train stations regain their former glory from the Ottoman period (a period that was definitely better in terms of urban planning). Unfortunately, instead of using the money to improve the convenience and operation of the actual train stations, they have spent an enournous sum of money on defunct stations that serve no trasportation purposes.

The city of Tel Aviv has revamped the Hatachana Compound (literally – The Station) and turned it into an open air mall, but its usage is rather low and the market that opened there has already closed down due to slow business. This came as no surprise, since the compound sits on the remnants of Manshiya (a neighborhood of Yaffo which was completely destroyed in the 1960s in a slum clearence scheme that created a lot of surface parking while diminishing housing supply). This compound is relatively inaccessible, and can only be reached by car, but since parking lots are not that interesting to visit this compound is not succeeding.

The Station Compound in Tel Aviv. On the road to nowhere.

Not to be left behind, the municipality of Jerusalem decided to turn its deserted old train station to an open air mall, too. In contrast to the Tel Avivian compound, the Jerusalem station compound (which is called The First Station) is slightly less disconnected from the city, even though its hiding behind the German Colony neighborhood, which has its own successful commercial street. The common featrues of both these stations is that no trains have pass by them in years. The station in Tel Aviv has been defunct since the establishment of the state in 1948 and the station in Jerusalem has been deserted for 15 years.

But it doesn’t have to be like this. Many cities in the world are renovating major transport terminals that are actually used for transportation and not just for consumption. Train station are obvious examples – the Utrecht central station is undergoing a major renovation. Another good example is the Antwerp central train station, which may be the most beautiful station anywhere in the world, and has undergone a major renovation in the previous decade. Even in North America there are more than a few examples. For instance, we can look at the Ferry Building in San Francisco. This building was opened at the same year as Jerusalem first station (1892). It was never completely abandoned, but it was run down for many years, due to the highway that ran over it and came down in 1989, among other things. In 2003 this building was reopened after a massive overhaul and the ferry service came back and was expanded. On top of the maritime accessibility that this building has, it is also situated near a major intersection of the San Francisco light rail system (which is rather flimsy).

Another good case is Lonsdale Quay in a city called North Vancouver (which actually lies north of Vancouver). This is another main station of ferries leading from Vancouver’s northern suburbs to the city itself. Before the conversion to a ferry station, this place was a dockyark. This is another fancy transportation hub, which not only cater to tourists, but also to many locals who pass there every day.

Israel is going through an extreme housing crisis. On top of it, inner city housing prices are skyrocketing in both in Tel Aviv and in Jerusalem. It’s quite obvious that all the most coveted areas where many people are eager to live in are the older sections, built before the advent of modernist urban planning. A lot of people want the advantages of high density, centrality, the variety of land uses that can be found in proximity and the opportunities that this combination gives. Prices show that may of us are willing to pay much more for this kind of urbanism than for the quiteness of the suburbs. The real estate market should have been responding to this demand for urban living and provide the appartments for the rising demand, but this is far from simple.

Christopher Leinberger, an American urbanist and real estate developer, describes a similar phenonmenon in the US in his book “The Option of Urbanism”. For years, the central cities in the US were dwindling and their affluent residents have been moving away to the suburbs, but now the dense urban centers have come back to be the most desirable the most expensive from a real estate perspective. Leinberger claims that the change in lifestyle and urban culture lead more and more people of all ages to prefer dense urban living in city center flats with a variety of transportation choices over spacious living with ample parking and greenery in the suburbs. He also finds parallels in mainstream culture. In 1939 Ford presented the suburban dream for the first time on a large scale, and in the 1970s the major sitcoms like the Brady Bunch have praised the good life in the suburbs, and then in the 1990s Seinfeld (and Sex and the City afterwards) have brought to TV the urban dream of living in a busy city. 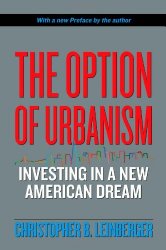 The book subtitle is “Investing in a New American Dream”. Leinbereger is not just another researcher of real estate and urbanism, but also a developer that works toward building walkable urban neighborhoods, which are very hard to create under the current regulations. Leinberger does not divide the urban fabric to city and suburbs according to arbitrary municipal lines, but rather to walkable urban sections and drivale suburban sections. Walkable urban areas usually offer multiple transportation choices besdies walking such as biking, public transit and private vehicles, while in drivable suburban areas that only rational transportion option is private vehicles. Leinberger demonstrates that older suburbs consist of walkable urban areas, while central cities have parts that are drivable only.

The growing demand for walkable urban living over drivable suburban houses is expressed by gentrification processes that change entire neghborhoods from slums to luxury areas where every built square meter is worth its weight in gold. Besides describing the change in consumer preferences, Leinbereger describes how the price of urban built square meter have risen over the years and surpassed the price of built square meter in the suburbs. He goes on to show an interesting reason for the high urban housing and it does not involve a crazy free market running wild, but rather too much regulation in the housing market. This regulation allows for suburban housing only (Leinberger specifies 19 standard real estate products in the American market) and impedes the building of urban housing in walkable areas.

The Israeli equivalent to the American standards are the regulations on parking and public open spaces. At first sight both appear to be logical – all we need is parking for our cars a little bit of grass for grazing. The minimum parking regulations, which enforce developers to provide at least one parking space for each appartment, raises the housing costs and inhibits the creation of high density which is needed for vital urban life. The public open spaces standards also serve to reduce the density. The combination of these regulations makes sure that all newly built neighborhoods will be drivable only and a car will be used for each and every daily errand. This might fit a few people wishes but not everyone. It appears that also in Israel there is a growing population that desire to live in an intensive and dense urban environment. In such an environment more destinations can be reached by cheaper transportation means such as walking and biking. Kids can walk to school and do not need to be chauffeured by their parents – and there is always a coffeeshop nearby. Such environments can provide plenty of opportunities, and there are more than a few people that are willing to pay good money for this.

The jist of Leinberger’s argument is that after over 60 years of building only parking and grass based housing, the dense urban housing became rare and precious and is coveted by young and old alike. At the end of the day, to enable the market to supply new urban housing (and not neccessarily cheap housing in the suburbs) we need to enable the creation of dense neighborhoods wasting little space on pakring and underused large grassy places. Not all new neighborhoods need to be dense and urban, but we should not outlaw the option to live in high density for those who want it. After all, those who live in high density areas also save public infrasturcture expenditures such as electricity and sewage.

Leinberger also expands on the differences between suburban places and urban places, and explains how building in a drivable suburban area actually lowers the quality of life there (new construction hampers movement with private vehicles, lowers the amount of parking available and reduces open spaces), while building in a walkable urban area actually impoves the quality of life (more options to reach a restaurant or an office by foot, more people to support more businesses, more options to provide better transit). At the end of the book, Leinbereger offers ways to create new walkable urban areas and options to fix stagnant suburban areas and deserted malls by building new developments and fixing the road network to make it more walkable (this process has been termed Retroffiting Suburbia by Ellen Dunham-Jones). To conclude, while this book is planted in the American reality, similar suburban processes have occured and are still taking place in Israel. Hopefully, Israel will not have to go through the entire cycle that the US has gone through before realizing it needs to fix the failures of drivable suburbanism.

And whoever want to see the man in action – here’s a recommended video. The first 54 minutes are a lecture that presents the main subjects of the book:

Cities Versus Suburbs Is the Wrong Debate

To buy the book on Amazon