Following the previous post which discussed actual observed pedestrian movement and commercial streets in Tel Aviv, we now turn to the major theoretical contribution we made in our last paper regarding the connection between the built environment and pedestrian movement.

In order to understand the connection between pedestrians and urban environment we have quantified a lot of built environment features. Those variables were divided into four different dimensions:

While conducting this study I have spent numerous hours doing field surveys to map all kinds of missing data. Specifically, retail fronts locations as well as road and pavement widths are not easy to come by. As the age of Big and Open Data is fast approaching I hope that more types of data will be collected on a regular basis, leaving us with more time for analysis. After we have collected all the quantitative data we ran endless statistical correlations to better understand how the built environment and movement are tied together. The conclusions below are derived from the statistical connections we found.

Our study draws heavily on space syntax theory, which emphasizes the dominance of the street network structure on various urban dynamics. One of the best known papers in this field deals with the connection between urban space and pedesrtian movement. This paper from 1993, written by Bill Hillier and others describes the natural movement of people in urban space and connects movement, land use and street network structure. 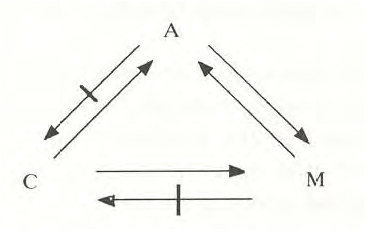 Our findings are in line with Hillier’s diagram. Our theoretical contribution is an extension of Hillier’s diagram to include the physical dimension and add the urban area type (traditional vs.contemporary) as the basis of the generation of urban space itself.  The physical dimension was found to be impacted by the configuration and to have an impact on movement (similar to the functional dimension). Essentially, sidewalk width may change due to people movement and in turn change the movement pattern. In the diagram below you can see Hillier’s original triangle to the right and at the the top is the urban area type which impacts all the urban environment dimensions. 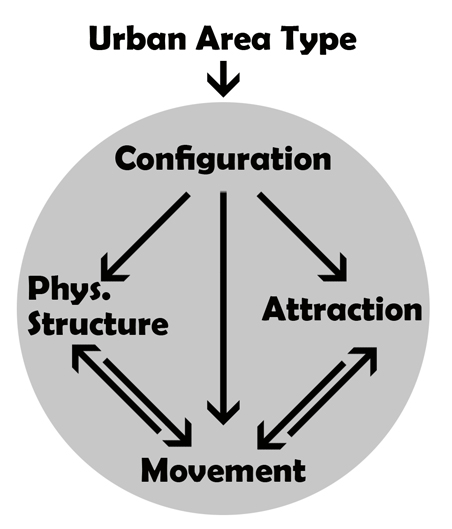 The next post will deal with specific finding and the struggle to find the best movement model for every city.